“This is Manchester, we do things differently here…”

In the late 80s and early 90s, Manchester was a massive cultural hub. The Hacienda was the UK’s most famous nightclub and its popularity continued to rise after the second Summer of Love in 1989. The club was owned by Factory Records and funded by the success of their biggest band New Order, who shot to fame in the early 80s.

The Hacienda (or FAC51) was a huge opportunity for many artists to perform and seek inspiration – many of these became the DJs and bands of the iconic Madchester scene.

Here, we explore the Madchester music scene, its impact on fashion, and the bands that pioneered a sound that’s still adored today.

The history and music of Madchester 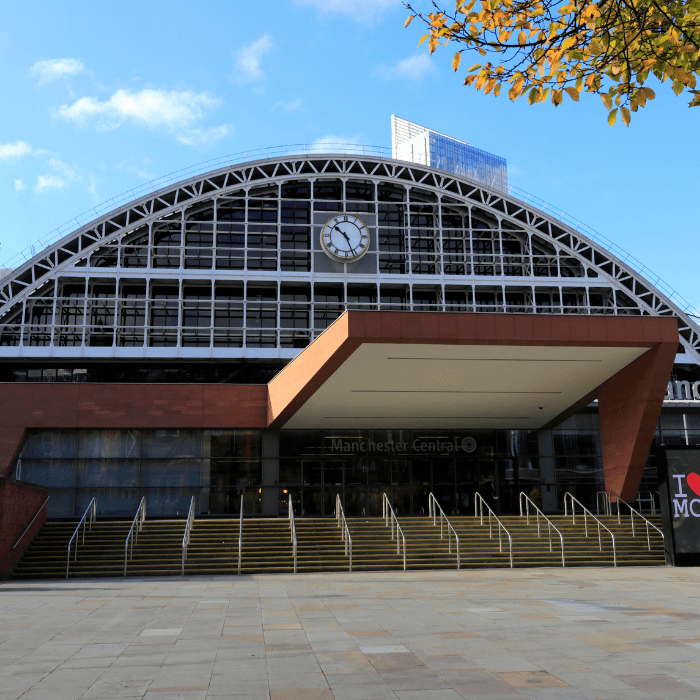 Formerly known as GMEX, Manchester Central has played host to some of Madchester’s biggest bands, including New Order and Happy Mondays.

In the late 80s, Manchester was a musical melting pot: The Stone Roses were on the cusp of the big time after releasing their iconic self-titled debut album, and Happy Mondays’ unique sound was a breath of fresh air. New Order had just released their house music-inspired album “Technique”. The tide was turning, a new sound was on the way – Manchester had embraced the rise of acid house and the second Summer of Love…

As well as the Madchester scene’s bands offering up something that listeners hadn’t heard before, the club scene was well and truly alive. A Guy Called Gerald’s “Voodoo Ray” went from a Hacienda favourite to being regarded as one of the top 10 best house music songs ever by Time Out Magazine.

The momentum created by these bands, producers and the Hacienda had meant there was a spotlight on Manchester – leading Manchester aficionado and Factory Records Owner, Tony Wilson, to coin the term ‘Madchester.’

Throughout 1990, Madchester bands were everywhere. Bands like The Inspiral Carpets, Northside, James and The Charlatans were storming the charts, and The Stone Roses played their iconic Spike Island gig in the same year.

By 1992 however, Madchester was on the decline, The Stone Roses effectively disappeared as they tried to get out of their record contract. Happy Mondays were in Barbados to record an album and decided to do everything but what they were meant to do. The Madchester band’s time in Barbados cost Factory Records so much it helped to bankrupt the label.

Madchester wasn’t the end of the city’s musical success, however, as two brothers – one a former Inspiral Carpets roadie and the other a lawnmower thief – decided to start a band called Oasis, who went on to become one of the world’s biggest bands.

“Don’t need no skin tights in my wardrobe today, fold them up and put them all away…”

The stereotypical Mancunian look – bucket hat, sweatshirt, cagoule and baggy jeans – stems from the Madchester scene but takes inspiration from the football casuals of the 80s, along with the hippies who converged in San Francisco for the original Summer of Love in 1967.

Oversized fits were the order of the day – seen mostly in T-shirts, polo shirts, sweatshirts, jackets and flares. These cuts have made a resurgence recently, as we transition from the skinny fits of the late 2000s and 2010s. Below, you can find a range of vintage-inspired designs from our Archive collection, all of which wouldn’t have looked out of place at Madchester’s peak.

Madchester bands were just as much a part of the fashion scene, and thanks to our links to the football casuals, we became part of the fabric of Madchester. Our sweatshirts were even famously worn by Ian Brown of The Stone Roses.

Bucket hats also became synonymous with the Madchester scene and baggy style, with Reni of The Stone Roses championing the hat, and ensuring it was cemented in British music and fashion culture forever.

Our favourite Madchester bands and their best songs

Despite the Madchester scene reaching its peak around 30 years ago, its cultural impression is still recognised. A Spike Island tribute gig took place in July 2021 and featured DJ sets from Clint Boon (Inspiral Carpets) and Bez (Happy Mondays).

“24 Hour Party People”, a film about Factory Records and Manchester’s music scene was released in 2002, and a feature-length documentary, “The Stone Roses: Made of Stone”, was made about the band’s reunion in 2012.

It’s Madchester music that has really stood the test of time, though. Without further ado, here are our top 10 Madchester songs:

Now you know more about Madchester bands and the casual yet edgy style, why not explore our Archive collection and find your next Madchester-inspired outfit?

For more style advice and music-related content, explore our blog. To explore the career of one of Manchester’s most famous bands and a huge inspiration to the Madchester scene, take a look at our History Lesson: The Smiths article using the link below.

The Smiths: one of Manchester’s most iconic and important bands, but how did they get their start and why did they break up? Find out everything you need to know.

Fit for a King

Mod Style Clothing and How to Wear it